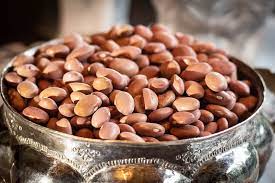 An heirloom pinkish bean from King City, California, with a rich history and a dreamy bean broth. It has a thin skin and a dense yet creamy interior.

King City Pink beans were mentioned by John Steinbeck in his seminal novel, Tortilla Flat. They helped put King City, California on the map in the 1930s and the bean's popularity peaked just after World War II. A classic American heirloom.

Plant in Spring. Thoroughly dry before storing in glass for winter.