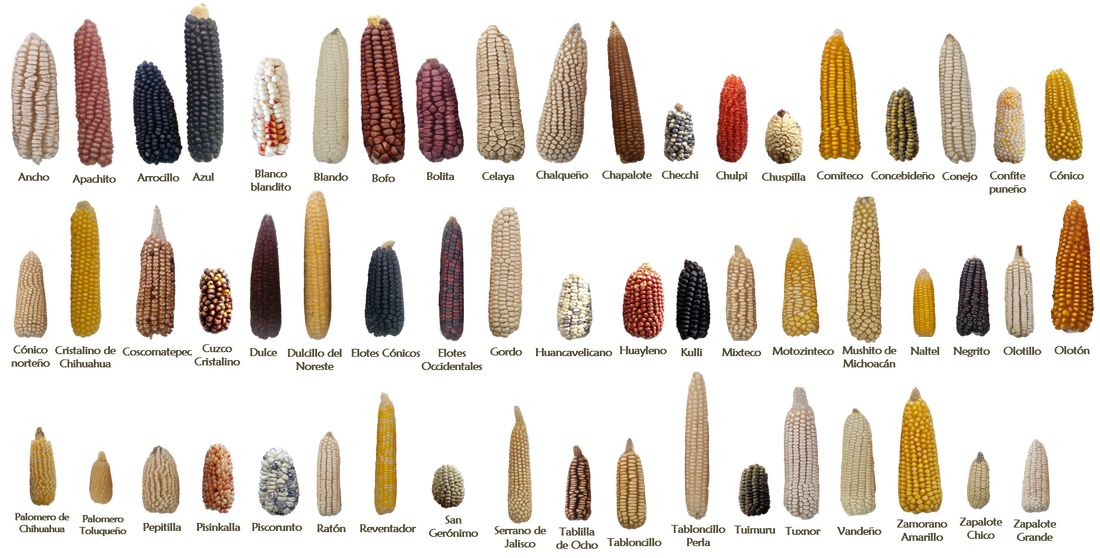 Mexican Heirloom Corn
Ancient Corn History:
Scholars now believe that the Balsas Valley area of south-central Mexico was the center of corn domestication some 9-10,000 years ago. Starting with short, thinly stalked plants bearing only one seed pod, the ancient Maya and Olmec civilizations saved seed from the best plants and slowly bred their corn over time into bigger and better plants. The original Maize may have been cross bred with a native grain called teosinte until the plants became taller, thicker and more productive. Now there are literally hundreds of different strains of maize. Columbus brought corn seeds back to Europe from Central America just before 1700 AD (Columbus actually never discovered nor set foot upon any part of North America in his four voyages). Over 5,000 years ago, ancient *Minoan ships likely brought North American corn back to the Mediterranean, where it migrated to Asia and became the high-gluten strain known as Asian waxy corn. The dried silk of corn is used medicinally for urinary problems.

On Growing Corn:
Corn is best planted in a block of at least three rows, with rows two feet apart. Planting in this manner assists in pollination and development of full ears. Make the furrows about four inches deep, sprinkle composted chicken manure or another high nitrogen fertilizer in the bottom of the furrow, drop the corn seeds (one every six inches or so) into the furrow, then cover with soil and tamp down by hand. Water thoroughly after planting, but then hold off on the water until the corn shows above the ground. Hot, sunny, dry days provide the best conditions for germination, and a hard crust on the surface makes it difficult for crows to pull up the young seedlings. After the seedlings reach three inches or so, thin them to at least a foot apart, and cultivate frequently and shallowly, pushing soil up around the plants as they mature (in order to give them more wind resistance). When the corn tassels appear, extra water is required.
Once the corn plants reach knee high, you can companion plant with squash, crimson clover, and/or pole beans. (Native Americans typically planted the "Three Sisters" of basic food: corn, beans and squash, all together in one cultivated field). When the clover or squash comes up, it covers up the bare soil and discourages weeds. The roots of any legumes, such as clover or beans, fix airborne nitrogen, which is then added to the soil and consumed by the corn. Corn needs a high amount of nitrogen and is a heavy feeder, therefore, active soil management is needed to keep soils fertile when growing long term. Composted manure, blood meal, feather meal and leather meal are all great natural sources of nitrogen, although vegans may not approve or even be aware of nitrogen sources used on organic farms. Fresh manure, especially chicken, may burn plants, so never use it raw. (Never use manure from any animal that eats meat.) Nearly ALL the natural sources of nitrogen come from animals. Human urine is high in nitrogen (uric acid) and can be used fresh IF mixed 20 to 1 with water. Fresh undiluted urine will overdose plants and may kill them (as witnessed by all the brown spots in your lawn left by the neighbor's dog pee), however, it is useful to pee into your compost bin on a regular basis. Wood ash can be added to soil topside just before the stalks mature, adding potassium from the NPK for best blooming.
Separate all corn varieties by 600 feet if growing for seed stock.

Harvest sweet corn when the silk just starts to dry/turn and the kernels are still full and juicy. Get the fire going under a big kettle of water before you even harvest heirloom sweet ears, then pick them and drop the fresh corn into the boiling water without delay. This will give you the sweetest corn, because sugars rapidly become starch once the corn is harvested.

To make parched corn (very good for winter soups), parboil the fresh ears for two minutes and then put in cold water and then dry in a dehydrator or in the sun. Once the kernels are dry on the cob, shuck them off and make sure they are completely dried through before storing in gallon jars for the winter. This is very similar to the method for freezing corn.
​
To freeze, parboil the fresh corn ear for two minutes, dump in cold water to cool, then slice the kernels off the ear with a knife and put them in plastic bags and freeze them right away--that works really well, and these can be taken out of the freezer and reconstituted by boiling in a little water and butter or coconut oil--yummy!

Some corns are best for roasting corn. These are usually a dense sweet or light dent corn with harder shells that require a longer cooking time. Roast over a BBQ or open fire and garnish with butter and salt and pepper. Yummy!

To save the seed for replanting, obviously, do not cook it! Let the ears fully mature on the stalks; then pick, shuck and dry ears on screens in a place with good airflow. When the seed is completely dry, remove the kernels and store in glass Mason jars for use the next year, or the year after.

Corn Varieties:
Indian corn is also known as Flint corn or Calico corn. Indian corn is often dried and used to make corn flour and hominy. Because each corn kernel has a hard outer shell when dry, it was likened to being 'hard as flint'; hence the name. Flint is an extremely hard stone known to many ancient peoples as a fire starter and sparking tool. It was so effective that the standard 'Flintlock' guns used from about 1600-1800 AD actually had a piece of flint on the striker, which would hit a metal strike plate on the gun, igniting the gunpowder in the gun at a time when gunpowder was still carried in a flask or converted cow horn, before bullets were invented.

Dent Corn is similar to flint corn, but is more a heritage from white settlers and small scale farmers in the USA. It was so named due to the dent that develops in the corn top after drying. Dent corn is dried and ground into corn meal, flour or masa. ​Dent corn is often grown for silage. Many dent corns were refined or cross-bred from original Indian corns centuries ago.

Asian Sweet Corn was originally from the Americas, but it traveled to Europe many millennia before America was 'discovered' by Columbus in 1492. About 5,000 years ago, *Minoan ships from the islands of Crete and Atlantis brought Native American corn to the edges of Asia. Since the ancient Minoan sailors were surface mining our Great Lakes copper over five millennia ago to fuel the European Bronze Age, removing from one million to one billion pounds of copper ore, they are the most likely candidates for whomever actually brought corn seeds and coca powder to the Mediterranean around 2-3000 BC. (We know this because an underwater Minoan shipwreck was filled with copper that metallurgical tests matched to the unique signature of the Michigan copper deposits that still are being worked today. And since scientists reported that South American coca powder had been injected into an ancient Egyptian mummy, we know that ancient Minoan sailors were also transporting dried coca leaves to the Mediterranean about 5,000 years ago.  The three New World C's: copper, coca & corn.) Those imported/exported American corn seeds eventually evolved naturally over many millennia into the waxy, high-gluten corn strain now found all over Asia.
Many millennia later, Asian waxy corn was newly 'discovered' by an American botanist in China in 1909. This strange plant showed several peculiar traits when later analyzed by western scientists. In 1922, a researcher found that the endosperm of waxy maize contained only amylopectin and no amylose starch molecules, in opposition to American maize varieties that contain both starches. Until 1941, the main source of starch in the USA was tapioca from Japan, but during WWII, food processors were forced to turn to waxy maize for starch production. Amylopectin or waxy starch is used mainly in food products, as well as in the textile, adhesive, corrugating and paper industry.
When feeding trials later showed that waxy maize could produce more efficient weight gains in cattle than normal dent maize, interest in waxy maize suddenly mushroomed. Waxy maize fields yield about 3.5% less per acre than their other corn cousins.
Geneticists have shown that waxy maize has an abnormal difference in metabolism precluding the synthesis of amylose in the endosperm. It is coded by a single recessive gene (wx).
Asian sweet corn must be cooked for at least 30 minutes. When dried, Asian corn does not shrink, shrivel or dent. It is so dense that is doesn't dent.

* A Shaman's Metaphysical Telling of some of the Secrets of Ancient History:


© Copyright 2011-2023, by Shaman Don, White Buffalo Trading Company. ​ All rights reserved.  Reproduction of any part of this page without written permission is strictly prohibited. (I spent over a decade of my life researching the mystical Essenes, and I even traveled to France, and to Jerusalem and the Essene ruins at Qumran next to the Dead Sea to uncover this secret hidden history. -Shaman Don)
​