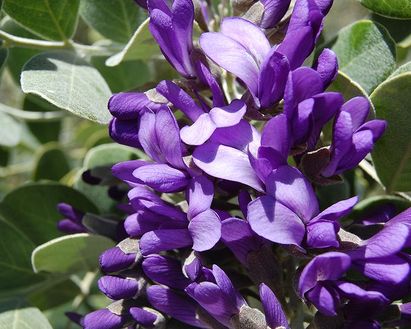 The Texas Mountain Laurel, or Sophora secundiflora, commonly known as the mescal bean, is a legume. AKA Mountain Laurel, Mescal Bean Sophora, Frijolillo, and Frijolito. Before the widespread use of peyote, the dangerous mescal bean was consumed by many native tribes.

​The bright red seeds or berries of the mescal bush contain a potent—albeit deadly poisonous—alkaloids called sophorin or cytisine. Native to Texas and New Mexico, mescal was ingested by some North American Indian tribes during their vision-seeking Red Bean Dance. In a 1957 issue of American Anthropologist, James Howard documented mescal bean cults among the Apache, Comanche, Delaware, Iowa, Kansa, Omaha, Oto, Osage, Pawnee, Ponca, Tonkawa, and Wichita tribes. The bean was regarded as a powerful fetish and used in many Native American ceremonies.
​
​Mountain Laurels are one of three powerful plants abundant from the Lower Pecos region of central Texas west to New Mexico and south to San Luis Potosi in Mexico that were used ceremonially by many native peoples to gain visions, talk to ancestors, cure sickness, or as part of a larger shamanic ceremony.

According to R.E. Schultes, mescal beans were discovered in an Indian archeological site dating back to 1,500 B.C. Even to this day, the leader of the Peyote ceremony in some of these tribes wears a necklace made from the red mescal beans. A single bean has the potential to kill a human being, therefore, for ceremonial purposes, less than half of a bean was likely consumed. In spite of its potent lethality, mescal beans are completely legal at this time. Yellow dye was once made from the sapwood.

Mescal seeds can be sprouted by scoring the seed pod and soaking the seed overnight. The sprout is tough and tree like. This is a dry desert plant that can grow into a large tree with pretty purple flowers.

Texas mountain laurel grows  naturally in the limestone soils of Central and Southwest Texas and up to 5000 feet in the Chisos and Davis Mountains.  This slow growing evergreen may be grown as a medium to large shrub or trained into a single or multi-trunk tree. The pinnate leaves with their lustrous, leathery upper surface provide year long beauty, enhanced in mid-spring by the densely-flowered racemes of lavender or violet pea flowers having the scent of grape Kool Aid. The black seedpods contain a row of red to red-orange seeds which are sometimes used in jewelry. Both seeds and flowers are quite poisonous and contain psychotropic properties.

In zones colder than Zone 8, flowering is not reliable because of late freezes which damage the buds. Texas mountain laurel is difficult to successfully transplant from the wild. However, it is being grown by a number of nurseries and is often available in Texas.

Good drainage is a must for success. So is frequent monitoring for "the worm," the Genista moth larvae which can decimate the foliage in a few days, and is its primary pest.