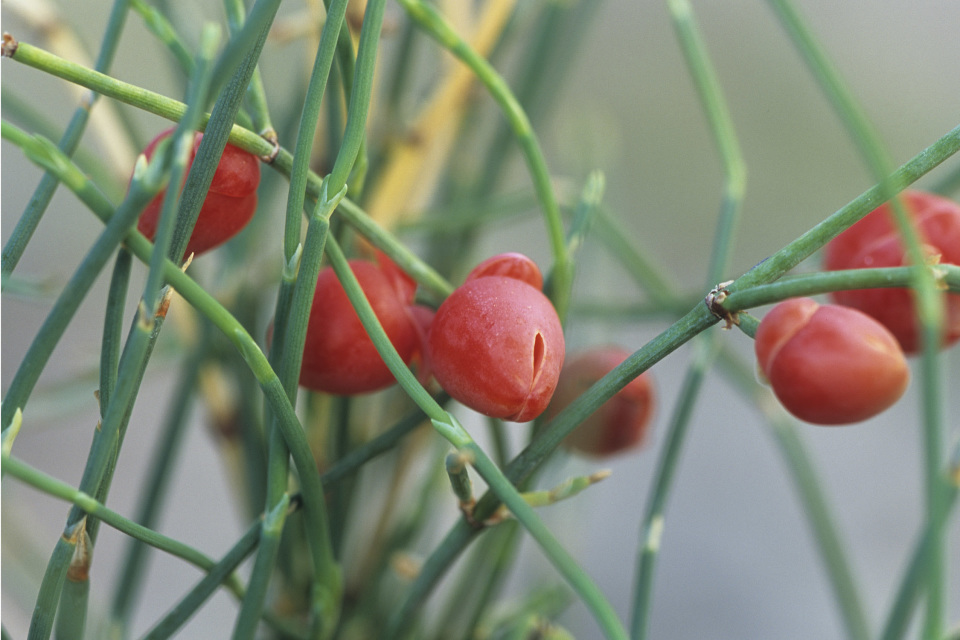 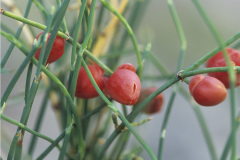 ﻿Ephedra sinica plant seeds, aka 'Ma Huang.' Limited supply. An important Traditional Chinese Medicinal (TCM) herb, similar to coffee or caffeine in its effects, but strong enough that the FDA banned it as an ingredient in food and/or supplements. An unscientific and prejudicial response, as caffeine is responsible for many more annual deaths in the world (perhaps as many as 1,000 annual USA deaths alone) than ephedra and it can be found on every corner in America. The main ephedra alkaloid found in its stems only--ephedrine--is both a general stimulant and is medicinal for asthma and many bronchial issues. Grow your own medicine.

Seeds are for planting only! >~~~~~Do NOT EAT these SEEDS! ~~~~< The stimulant is ONLY found in the stems of the plant. The seeds do NOT contain any ephedrine or any other drugs or alkaloids.

Plant Rant 1: Eating my seeds is ignorant and dumb, so just don't do it! Don't piss off a shaman or the Plant Spirits. Do not write me later and complain that you destroyed these rare seeds by eating them, and felt nothing, and it did not help your asthma, because you are really too lazy to read or research the truth and you act on false assumptions. I will not be nice to you, or to any other ignoramus plant seed killers who do this. I hear this too often, and the Plant Spirits do not like it, and then I see it in my dreams. If you want to waste your money, just send your cash to me by mail. No kidding. I take cash. No reason to waste seeds on you that are, at best, a placebo when eaten. Or let me send you dill seeds instead. At least that will freshen your breath. I would like to tell you that eating these ephedra seeds will cause major erectile dysfunction, immediate balding, bright green gangrene lips and you will grow a tail, but we deal in honesty here, so, but, the seed eaters can believe it anyway!... Curses upon seed eaters! May acorns shower your car with dents, stones ding your windshield, rains seep in through unseen cracks, and may huge Thunderbirds poop upon your car until it looks like a smelly, slimy zebra. More curses upon seed eaters.

Ephedra is an evergreen perennial shrub, native to China and Mongolia, that loves dry sand. (A person in Tunisia sent me photos of ephedra growing wild all over there.) Grows only about a foot or two tall. It doesn't have 'normal' leaves; instead it produces rigid, blue-green branches to form an ever-widening mat, similar to a succulent. Looks more like a marsh reed than a traditional bush. The plant normally flowers in spring, perhaps again in fall in some climates. Both male and female plants must be grown if you want to fertilize the flowers for seeds.

Plant Rant 2: No, I cannot tell which seeds are macho male and which sexy seeds are fab female, so stop asking. I may be a plant whisperer, but they don't tell me this one is called Billy Bob and that one is named Billy Jean. Ephedra seeds do not have any sexual parts on them, like I can use a magnifying glass to see the magnificent male seed's pointy, protruding penis strongly swinging in a balmy breeze, or another who's a mother with "bigly," bomber boobs bouncing on a bodacious beach in a teeny-weenie bikini sipping a marvelous martini. Nope. Nada. A big N-O. Just figure half will be one gender, and so on, until you run out of genders. (Hint; They are not ever LGBTQ+++, nor do they turn hermaphrodite like Cannabis.) Nature balances naturally and remains old school in spite of the progressive agenda. Or, just assume the big ones are male. LOL... not! (maybe it is pregnant? …or fatly, flatly overweight?)

Ephedra sinica is a desert plant. It is more like a desert cacti or succulent that thrives in dry, rocky soil with little water and full sun and must be grown as such.

Plant Rant 3: If you are too lazy or arrogant to read my growing instructions, do not write me later and say the seeds don't work and send me photos of your empty Peat Pots, with your seeds buried deep in a soggy peat moss mess. Peat moss holds water and is great for hemlock seeds that love constant wetness and pond edges, but NOT for any desert plants, you obvious, oblivious amateur. You blame the seeds because you have NO idea what you are doing. It is a plant like a succulent from the Gobi Desert with dormant seeds that may take two years to sprout. GO-BEE DESERT is not a sweet dessert. Do NOT put cactus or ephedra seeds into wet peat moss. Ever. Your seeds will rot and start competing with your own... brain-rot.

OK. Let's do a dumb and dumber recap:

Ephedra sinica should be planted in the spring in dry locations with sandy, well-drained desert soil. Seeds are dormant and may take many months to come to life. Press into soil so that the seeds get light and occasional water. It thrives in ordinary loamy or sandy soil and does very well in a loose rocky soil with full sun and little water. It is most often propagated by division of the clumps in spring, with the seeds sown in a light sandy soil in early spring. Grow like a cactus. Tolerates hard frost and snowy altitude without an attitude. Likes dry sand and rough rocks. The seed is fairly easy to germinate in a warm, sandy medium. Strew the seed on surface of very sandy potting soil (50% sand) and cover 1/4 inch deep with more of the same potting soil mix. Tamp securely, and keep evenly moist until germination, which in the greenhouse or under propagation lights should take about 7-14 days minimum. The best medium for sprouts is to spread about four inches of sand on the surface, then plant the ma-huang seedlings through the sand, with its roots down in the soil and sand all around the crown. This excellent drainage and the reflection of the sun up onto the plant will greatly improve the health, growth and survival of Ma-huang. Do not give up. After a first try, let seeds dry out, then try watering again in a different growing medium.

Preparation of the right site is particularly important for a plant of this nature, which must maintain a dry, warm crown during the growing season lest the crown begin to rot. The best preparation is to spread about four inches of sand on the surface, then plant the ma-huang seedling through the sand, with its roots down in the soil and sand all around the crown.

Seeds are imported from the Gobi Desert of Inner Mongolia Autonomous Region of China. Germination rate at source was reported at 85% and confirmed by an independent trial here in the USA. Some customers report only getting 50%, Some only 10%, but they are likely not using ideal germination methods (some report 100%).

More Germination instructions under the 'Plant Lore' pull down menu on the Ephedra page.

~Allow one to 24 months for germination.~

Plant Care:
Customer Feedback,
I was so impressed by my first E. sinica seeds (70%+ germination rate). I used a heating pad and complete darkness. It took less than a week to get green sprouts.
-Kirk