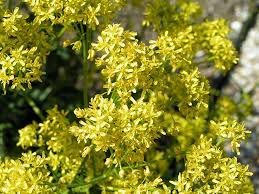 This biennial plant, native to the steppe and desert areas of the Caucasus, has had a relationship with humans since Neolithic times. Isatis refers to its healing quality in treating wounds; tinctoria alludes to its use as a dye plant. It was commonly used in Europe until the 16th and 17th centuries, when it was largely replaced by Indigo. Like Indigo, the leaves require a bit of art and technique to yield the strong blue color.

Also used as a human food and in medicine as an antibiotic, anti-inflammatory, antiviral and anti-cancer herb.

Listed as invasive by a dozen states or so in the west and southwest. It will reseed itself and keep on prospering if not contained.