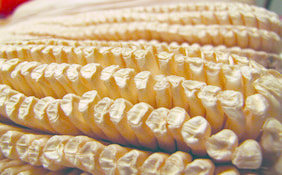 120 days. Originally brought to south Texas by German farmers who migrated from Appalachia during the late 19th century. Stalks average 8 ft. tall, two ears/stalk, containing 18–22 rows of cream-colored, narrow kernels, compactly united from the cob to the surface. Although it is susceptible to smut, it is resistant to other corn diseases, it withstands drought, and even does well in clay soil.

This variety closely approximates original gourdseed characteristics. In south Texas, this is considered to be the best choice for tortilla flour.

Gourd-seed corns are one of America's oldest corns migrating from Native Americans to white settlers in the 17th century, and were commonly grown in Virginia and throughout Appalachia for centuries. Its seeds resemble those of Native American gourds, being long and narrow, unlike most other corn.