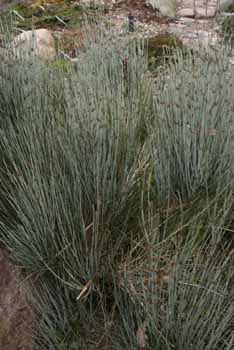 When to Sow: Fall, cold refrigerator

(Chinese ephedra) Properties and uses are similar to those of E. sinica but it contains the additional anti-inflammatory compound, ephedroxane. Saponin content is somewhat lower than E. equisetina.

﻿Ephedra intermedia plant seeds, aka 'Zhong Ma Huang.' An important Traditional Chinese Medicinal (TCM) herb, similar to coffee or caffeine in its effects, but strong enough that the FDA recently banned ephedrine as an ingredient in food and/or supplements. Unscientific and prejudicial response, as caffeine is responsible for many more annual deaths in the world (perhaps as many as 1,000 annual USA deaths alone) than ephedra and it can be found on every corner in America.

The main alkaloid, found in its stems only, ephedrine is both a stimulant and is medicinal for asthma and many bronchial issues. The stems can be harvested at any time of the year and are dried for later use (Ephedrine is also a main component of illegal meth, and so it has been given a bit of a bad rap.) Grow your own medicine. (I only sell seeds, not any other ephedra plant parts.) Do NOT combine use with an MAOI such as P. harmala!

This herb should be used with great caution, preferably under the supervision of a qualified TCM practitioner.

Seeds are for planting only! >~~~~~Do NOT EAT these SEEDS! ~~~~< The stimulant is ONLY found in the stems of the plant. Ephedra seeds do not contain ephedrine.

Plant Rant 1: Eating my seeds is ignorant and stupid, so just don't do it. Don't piss off a shaman or the Plant Spirits. Do not write me later and complain that you destroyed these rare seeds by eating them, and felt nothing, and it did not help your asthma, because you are really too lazy to read or research the truth and you act on false assumptions. I will not be nice to you or any other ignorant plant seed killers who do this sort of thing. I hear this too often, and the Plant Spirits do not like it, and then I see it in my dreams. If you want to waste your money, just send your cash to me by mail. No kidding. No reason to waste seeds on you that are, at best, a placebo when eaten. Or let me send you dill seeds instead. At least that will freshen your breath. I would like to tell you that eating these ephedra seeds will cause erectile dysfunction, immediate balding, permanent sterility, and bright green gangrene lips, but we deal in honesty here, so, but, the seed eaters can believe it anyway!... Curses upon seed eaters! May acorns shower your car with dents, stones ding your windshield, rains seep in through unseen cracks, and may huge thunderbirds poop upon it until it looks like a slimy zebra.

Ephedra is an evergreen perennial shrub, native to China. (A person in Tunisia sent me photos of ephedra growing wild all over there.) Grows only about a foot tall. It doesn't have 'normal' leaves; instead it produces rigid, blue-green branches to form an ever-widening mat. Looks more like a marsh reed than a bush. The plant normally flowers in spring, perhaps again in fall in some climates. Both male and female plants must be grown if you want to fertilize the flowers for seeds.

Plant Rant 2: No, I cannot tell which seeds are muscular male and which sexy seeds are fabulously female, so stop asking. (I am not making that up; People do ask.) I may be a plant whisperer, but they don't tell me this one is called Billy Bob and this one is named Billy Jean. Ephedra seeds do not have any sexual parts on them, like I can see the manly macho seed's pointy penis swinging in a balmy breeze or shrinking when refrigerated, or another who's a mother with bigly, bouncy boobs in a teeny-weeny-bikini sipping a mean martini. Nope. Nada. Just figure half will be one gender, and so on. Nature normally balances naturally.

Ephedra intermedia should be planted in the fall in dry locations with sandy, well-drained soil, or, plant in a tray and put in the refrigerator and move sprouts out as they pop. It thrives in ordinary loamy or sandy soil and does very well in a loose rocky soil with full sun and little water. Grow like a cactus. The crown likes to be in dry sand and rough rocks. Tolerates frost and snow and altitude without an attitude. Likes dry desert sand, may tolerate cactus mix. Strew the seed on surface of very sandy potting soil (>50% sand) and cover 1/4 inch deep. Tamp securely and keep evenly moist until germination. The best preparation for sprouts is to spread about four inches of sand on the surface, then plant the Ephedra sprouts through the sand, with its roots down in the soil (cactus mix) and sand all around the crown. Excellent drainage and the reflection of the sun up onto the plant will greatly improve the health, growth and survival of Ephedra seedlings. Do not give up. After a first try, let seeds dry out, then try watering again and start over.

~Allow one to 12 months for germination.~

Seeds are imported from China. Best in Zones 6-8.

This species is germinated in the fall, not the spring!