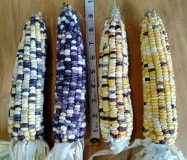 Developed in the early 1900s in south central Ohio, nicknamed 'Rotten' because the blue kernels looked a lot like bruised corn kernels. Not a good name for marketing, but still more interesting than naming it Clarage-2495C. A variety called Ohio Blue Clarage was grown from this corn strain using just the blue kernels. Mixture of yellow, blue, white kernels.

Once favored by livestock producers, it was still widely grown into the 1980s before corn with numbers instead of names became commonplace. Farmers reported that feeding this corn to chickens noticeably improved the quality of their eggs.