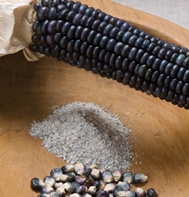 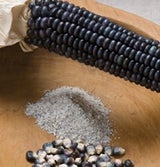 85-105 days. Open-pollinated. Organically grown in Oregon, but not certified. Large kernels of blue corn, noticeably bigger than the corn stock from other suppliers.

Once a traditional staple corn of the Hopi people. Hopi Blue grows 5-7' tall with purple/blue 9" ears with beautiful deep kernels easily ground into flour. Can be eaten as sweet corn when picked young. Very drought-tolerant.

Hopi Blue has 30% higher protein levels than other dent corns.

Used traditionally by the Hopis to make their ceremonial Piki bread. Precursors of this strain have been raised continuously for 800 years on the mesas of northern Arizona and into the four corners area.