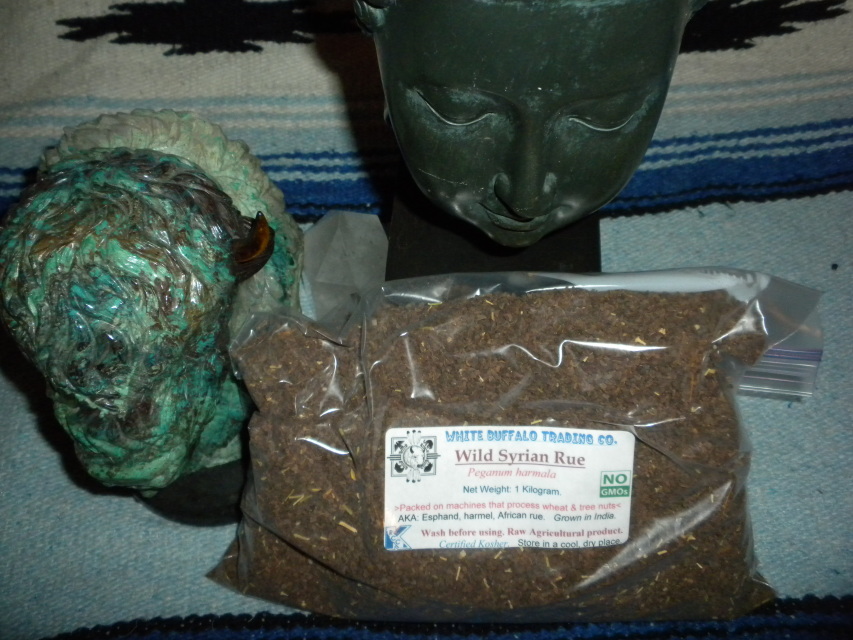 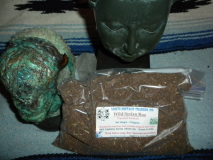 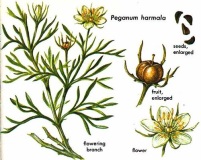 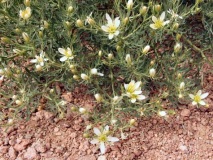 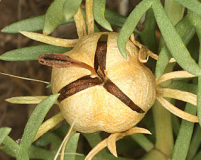 Rue seeds, aka Esphand, African rue, harmala, Spilani. Rue has been used in Persian cooking as a seasoning, as the source for a plant-based yellow or red dye (traditional Persian Red), as a natural incense to ward off evil spirits and to bless newlyweds, during Sufi prayers, in some Jewish customs, in native shaman brews as an MAOI ingredient, and even more. Very versatile herb. Good seed germination, but sporadic.

Imported from Asia, often Afghanistan, Pakistan or Turkey. This is a raw agricultural product that is unwashed. Not treated, but could contain pebbles, hair and dirt along with seeds. Not sold or intended for internal use.

Desert plant. Harmala (Peganum harmala) is a plant of the family Nitrariaceae, native from the eastern Mediterranean region near Syria east to India. It is also known as Wild Rue or Syrian Rue because of its resemblance to plants of the rue family, but it is really not a true rue, botanically.

Perennial plant; Height: Up to 30 cm; Flower color: White; Flowering time: June through August, or spring and fall. The species is hermaphrodite (having both male and female organs). Rue can grow to about two feet tall, but normally is about a foot tall. The roots of the plant can reach a depth of almost 20 feet if it is growing in dry soil. It blossoms between June and August in the US. The flowers are white and about 2.5–3.8 cm in diameter. The round seed capsules measure about 1–1.5 cm in diameter, contain three chambers and carry more than 50 seeds each.

Growing tips: See the Plant Lore page. Rue seeds germinate fairly reliably by scattering them thinly over the surface of normal, moist soil mix and tamping them in lightly. Keep in filtered sun and maintain moisture. It prefers well-drained, sandy soils, but does well in many diverse conditions. Full sun. Best soil is: half cactus mix and half coarse sand. Soil mixes can be as much as 90% sharp sand and gravel. Prefers dry, sandy desert locations; it primarily spreads by branching roots in spite of intense seed production. Likes alkaline, clay soils but is not restricted to them.

Very drought tolerant. Deep roots make it hard to eradicate once established. When the plant sprout is only one inch tall, it will already have roots 15 inches deep! Hence, they are poor candidates for transplanting. Considered invasive (hard to believe), and so wishing it would invade my garden! Please!

Add to Cart
Due to the alkaloids present in the plant parts, toxic reactions and overdose potential do exist. Not recommended for internal use without the advice of your physician. Never use if you are pregnant, as the alkaloids can cause termination. OD can cause nausea, vomiting, dizziness, tremor, ataxia, and hallucinations, which normally subside in a few hours.
​In Turkey, dried parts of this plant are strung and hung in homes or vehicles to protect against "the evil eye." It is widely used for protection against the Jinn, or evil spirits, in Morocco and Northern Africa.
In Afghanistan, Azerbaijan, Iran, Iraq, Turkey, Uzbekistan and Tajikistan (old Persia), dried seeds are placed onto pieces of red-hot charcoal. They eventually explode with little popping noises, releasing a fragrant smoke that is wafted around the head of those afflicted by, or exposed to, the gaze of strangers. As this is done, an ancient prayer is recited. This prayer is said by Bukharian Jews,  Muslims, and Zoroastrians. This Persian practice dates to pre-Islamic, ancient Zoroastrian times. In Iran, this ritual is sometimes performed in Persian restaurants, where customers are typically exposed to the "eyes of strangers." It is also used in India in the region of Kashmir, where the seeds are ignited in charcoal fire pots to ward off evil on occasions such as traditional marriages.
In Iranian traditional medicine the plant is still used for plumbago, asthma, colic and jaundice, as well as for menstrual problems.
Syrian rue seeds, which contain b-carbolines (harmala alkaloids), have been used ritually and medicinally in Central Asia and the Middle East for probably a few millennia due to their unique ability to block the transmission of monoamine oxidase. The MAOI factor is utilized commercially in many current pharmaceutical anti-depressant formulas, thus giving rue potential medicinal value.
Small quantities of harmine stimulate the brain and are said to be therapeutic, but an excess of harmine depresses the central nervous system and causes more toxic reactions. In other words, small amounts may be medicinal, but too much can be somewhat poisonous, as is typical with many medicinal plants.
​In the past, rue was used medicinally for the treatment of stomach complaints, urinary and sexual disorders, epilepsy, menstrual problems, pain, skin cancer, mental and nervous illnesses, fever, rheumatism, hemorrhoids, and expelling tapeworms and lice. It was also used as an aphrodisiac. Rue has antibacterial, antioxidant, anti-mutagenic and anti-mold properties.
​The ripe seeds contain 3.8 – 5.9% active alkaloids, especially harmine (which is anti-parasitic), harmaline, harmalol, tetrahydroharmine and peganine, and some quinazoline derivatives such as vasicine (which kills leishmaniasis) and vasicinone.
​