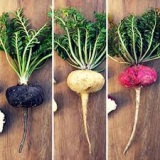 Maca is an indigenous Andean vegetable that has been grown and cultivated as a root crop for at least 2,000 years. Used nutritionally and medicinally, and as a stimulant, Maca grows wild in Peru, Bolivia, Paraguay, and Argentina, but has long been cultivated in the highlands of the Peruvian Andes. Even though Maca root powder has become quite popular in the last decade, it has been used as an important food since the beginning of the Inca Empire. Maca looks similar to radishes or turnips in shape and the roots are various colors: creamy-yellow, purple, red or black.

Maca is a cruciferous vegetable, related to broccoli, cabbage, and kale with similar health benefits.

Maca is a common ingredient in Peruvian cooking that gives dishes an earthy flavor. Maca root plant can be ground up into a powder and added to soups or smoothies.

Aside from its culinary uses, maca also has health benefits. As a caffeine-free, plant-based stimulant and superfood, it's hard not to love maca. Not only can Maca contribute to overall well-being, it can balance hormone levels, boost energy, and support a healthy libido. This versatile adaptogenic herb helps the body adapt and deal with different stressors so you can live a well-balanced life.

Maca seedlings usually emerge about one month after sowing in September with the onset of the rainy season in October. In the vegetative phase, until May to June, the lower part of the hypocotyl, as well as the upper part of the tap root, grows in size. After 260 to 280 days, it is formed to a harvestable root.

If the root is left in the soil, it is dormant for two to three months in the time of the cold, dry season until August. Then it will form a generative shoot on which the seeds ripen five months later. One plant is capable of forming up to 1,000 tiny seeds; 1,600 seeds weigh only about one gram.