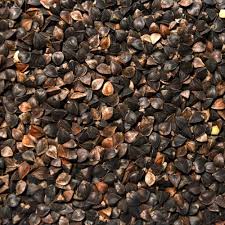 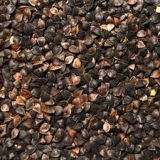 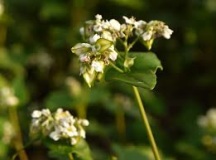 Buckwheat is the perfect cover crop, adding valuable green manure to your soil. You can also harvest it for seed. This is THE crop for bee food. Honeybees just love buckwheat and it makes a highly sought after honey rarely found on the market anymore. You will notice that blossoms are more active in the morning when the plant produces more nectar.

If you are trying to raise different varieties, NEVER plant them at the same time, as they cross very easily. Just raise one variety, harvest, then plant the next.

It is believed Dutch settlers brought the first Buckwheat to the Hudson Valley of New York in the US. It is said that production reached a peak in 1866 when the buckwheat grain was commonly used as a livestock feed and was in high demand for making flour . A dye can also be made from buckwheat.

Buckwheat is an ancient food used for more than 5,000 years by humans. It is believed to have originated in Asia.

The large tap root does best in well drained soils. Buckwheat does well in poor soils and does not respond well to nitrogen fertilizers, so don't waste them on this plant.

The triangular seeds are high in good carbs, complete protein, iron and other minerals. It is often cooked and eaten just like wheat. Gluten-free plant.