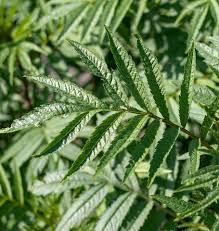 Also known as Huacatay, this Andean native is more closely related to the marigold than to mint. But its complex herbal aroma immediately reminds one of mint. Notes of cilantro, licorice, and citrus can also be detected by the nose of a gourmet culinary master. Makes a good alternative for those who dislike the flavor of cilantro. An annual only in frosty areas.

The leaves will be familiar to anyone who has grown marigolds, but the Latin species name minuta refers to its sparse and diminutive flowers. Yet the plants can reach six ft. tall, so they are a striking addition to any herb garden.

The roots of Peruvian Black Mint are known to kill many perennial invasive weeds, including Ground Elder, Couch Grass, and Field Bind Weed.

Peruvians use this herb to make a green sauce called Black Mint Paste, which is an essential ingredient in the dish called Ocopa. Also a beloved herb for flavoring sauces, teas, risotto, potatoes, chicken and fish. It is a key ingredient in the classic Peruvian aji verde sauce. Peruvian roast chicken is typically made with huacatay and aji amarillo chili peppers.