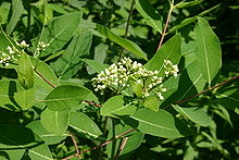 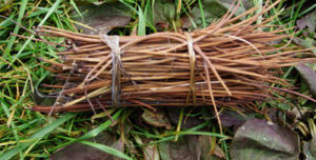 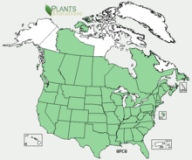 Apocynum cannabinum. Herbaceous perennial native to most of North America. The plant's strong fibers (seed silk and bark) have made it prized for cordage and thread for centuries, powering both fire-starters and arrows. AKA: dogbane, Amy root, hemp dogbane, prairie dogbane, rheumatism root, wild cotton, and qéemu (Nez Perce). One of about five diverse plants that are referred to as "Indian Hemp."

The plants grow to about five feet tall, quite thin and upright. Plant prefers shade to sun, and is often found in abandoned agricultural land or near streams. Sow in spring, just beneath surface, tamp well and keep moist until germination. This is a tough plant that will survive in the wild.

The plant has opposing leaves and dense heads of small greenish-white flowers, which are popular with bees and moths. Flowers are followed by long, narrow pods that contain many silk-tufted seeds. The bark can readily be stripped off and used as-is, or it can be rolled or braided into rope.

Low dose botanical, potentially toxic, containing cardio-active glycosides. It is a poisonous plant: Apocynum means "poisonous to dogs". All parts of the plant are considered poisonous as it can cause cardiac arrest if ingested. A. cannabinum was much employed by various Native American tribes who used it to treat a wide variety of complaints including rheumatism, coughs, pox, whooping cough, asthma, internal parasites, and diarrhea, and to increase milk flow in lactating mothers. The root has been used as a tonic, cardio-tonic, diaphoretic, diuretic, emetic and expectorant. It is harvested in the autumn and dried for later use. The fresh root is the most active part medicinally. A weak tea made from the dried root has been used for cardiac diseases and to expel parasitic worms. The plant is still used in modern herbalism, although it should be used with great caution and only under the supervision of a qualified health practitioner if taken internally.