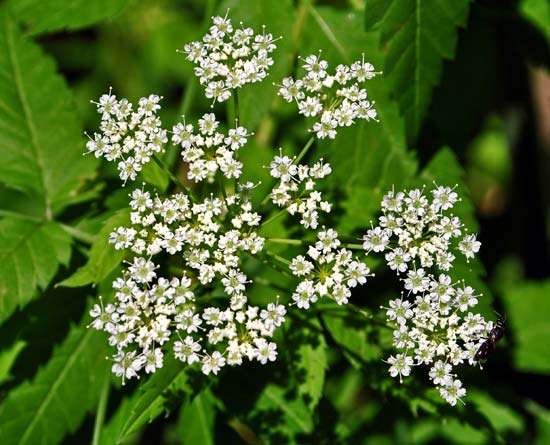 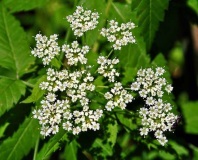 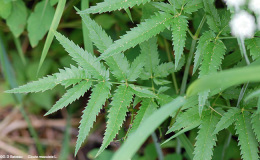 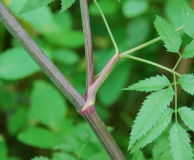 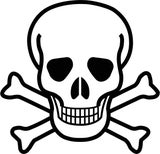 Water Hemlock is a truly poisonous perennial, with a short, thick, vertical, hollow root-stock, in shape somewhat like a parsnip, branching off whorls of slender, fibrous roots. The erect, very stout, hollow stem, rising up to four feet high or more, is smooth, branched and slightly furrowed. The lower leaves are large, one to two feet long and long-stalked. The upper leaves are divided into three leaflets, and each again into three. The flowers are pure white, arranged in rather large, long-stalked umbels.

The root is particularly toxic, containing the highest concentrations of cicutoxin, a potent neurotoxin. When ingested it kills humans and animals, although a Google search of potential human deaths found none in the last century. Cattle that eat a root in a freshly plowed field can be dead in less than an hour. The toxin causes extreme convulsions, which can then cause exhaustion and respiratory failure.

While Conium maculatum is called 'poison' hemlock, it is not "poisonous" at all but simply contains a strong muscle relaxant, whereas Circuta maculata is truly poisonous. Water hemlock can be distinguished by the lack of purple-spotted stems, and very different leaves that are not fern-like but are broad and saw toothed more like Cannabis. Both grow near water and have similar white flower clusters. Do not eat any part of this plant. Grows all over the continental USA, near water.