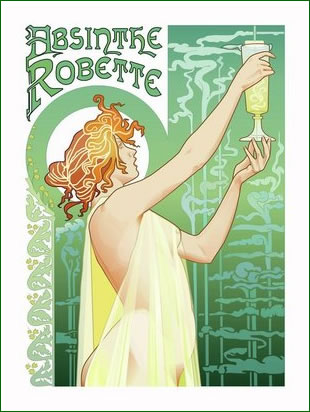 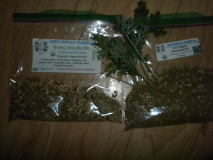 SKU:
$4.95
$4.95
Unavailable
per item
One bag with USDA Organic herbal mixture, and, One ounce of Wormwood, USDA Certified Organic. Mix with alcohol.
Add to Cart
Just add alcohol and do a double soak!
The White Buffalo European Absinthe Kit, consisting of two bags with organic herbs for making "absinthe." Our first bag contains one ounce of USDA Organic Wormwood for the first "brew" stage. Second bag contains the remainder of the pre-mixed organic herbs and spices needed for making a true herbal absinthe. Both bags are 100% USDA certified organic. If available and in season (spring to late summer usually), I will throw in some fresh organic (not certified) wormwood from my NightShade Farm along with the primary bag of dried wormwood.
One of my long-time, popular, exclusive items from an old European recipe.
Absinthe was a traditional favorite of many in the old Bohemian crowd of famous artists and writers. This drink was once banned in the USA due to untrue fear-mongering about the thujone component of wormwood, a significant ingredient. However, it was subsequently shown that traditional absinthe's high alcohol content is the real culprit in its punch, so temper accordingly.
The various herbs add a complex yet decisively bitter with an anise twist component to this traditionally European, herbal alcohol. Not for the faint of heart.
One ounce of dried certified organic wormwood (and sometimes with some fresh wormwood) and a second bag of organic mixed herbs for the finish step. Directions included; double extraction without distillation.
All organic ingredients using a traditional European recipe with:  organic anise, angelica root, fennel, hyssop, coriander, caraway and a pinch of pungent and expensive cardamom pods. The resulting brew is bitter and noticeably anise flavored.  When possible and in season, a cutting of fresh organic wormwood leaves from my NightShade Farm are included in each order to ensure true green color. 100% USDA Organic dry herbs. I have some customers who customize this formula, adding vanilla and other herbs to their brews. Have fun!

Kit Directions:
Note: Fresh herbs must be used to give the resulting herbal drink its traditional green color.