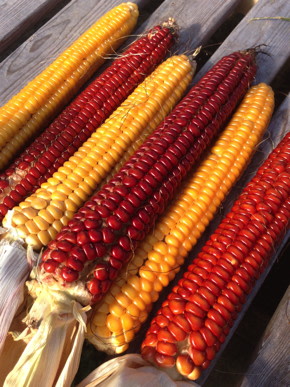 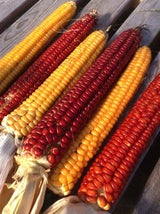 85 days to mature grain Up to 9' stalks . Open-pollinated heirloom dent corn that has been a staple in the Amish community for centuries. Wapsie is two-color: producing large, well-formed ears of either all coppery red or all dark yellow kernels.

This variety is named for the Wapsie Valley region in Iowa, in turn named for the Wapsipinicon River. The name of the river in the Ojibwe language is Waabizipinikaan-ziibi (“river abundant in swan-potatoes”) due to the Arrowhead plant, also known as Wapato, or “swan-potatoes,” found growing naturally along its banks.

Plant as soon as the soil is warm (at least 60°). (While corn will establish poorly in cool soil, late planting decreases yields.) Corn requires high fertility (plant after legumes in your crop rotation) and does not like to have wet feet. It competes poorly with weeds and requires frequent cultivation to perform well. Over-seed white clover or annual ryegrass after the final cultivation to reduce the risk of erosion and discourage late-germinating weeds.

As animal feed: Wapsie is a high-yielding and reliable silage corn. For grain, open-pollinated corn has 25% more protein than hybrid corn. Wapsie grain has tested as high as 10.75%.