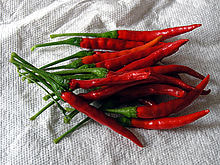 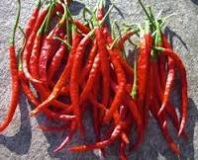 Heirloom chili pepper popular in Mexico, red when ripe. These chilies contain a medium heat similar to the serrano pepper, from 15,000 to 30,000 SHU on the Scoville heat scale. That’s two to 15  times hotter than the jalapeño pepper, but not quite the heat of the cayenne pepper (30,000 – 50,000 SHU), which is closely related and even resembles the Chile de Arbol in appearance. In Mexico, you may hear these hot peppers referred to as Bird’s Beak or Rat’s Tail chilies because their stems are so hard. They have a bit of a nutty or smoky flavor, and stay red when dried. Used both fresh and dried in many dishes, especially salsa. Chile peppers were worshiped by the Incas as one of the four brothers of their Creation story, and in the Aztec and Mayan cultures, chilies were also held in high regard.