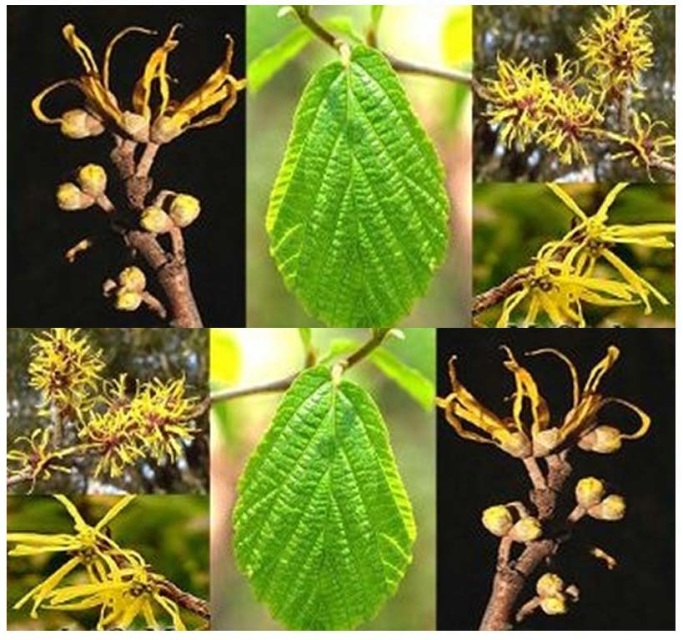 Moist soil. Hamamelis virginiana is the hardiest witch hazel, displaying fragrant yellow flowers between October and December, often as the leaves are turning yellow in the fall. It usually has several trunks arching into an open, rounded canopy, and likes moist soil. Native to eastern, central, and south central North America.

An extract of the plant is used in the astringent witch hazel.

H. virginiana produces a specific kind of tannin called hamamelitannins. One of those substances displays a specific cytotoxic activity against colon cancer cells.

The bark and leaves were used by Native Americans in the treatment of external inflammations. Early settlers learned of its astringent properties (which are due to naturally occurring compounds called tannins) from the Native Americans and adopted it as a home remedy for skin ailments.

The forked twigs of Witch Hazel are preferred as providing the very best Divining rods.

With its showy autumn foliage and striking yellow flowers, witch hazel adds color to gardens virtually year-round within U.S. Department of Agriculture plant hardiness zones 3 to 9. They grow well from seeds, which can take anywhere from one to two years to sprout. Fresh seed germinates reliably in eighteen months if sown in pots and placed outdoors, while stored seeds require extensive artificial stratification to break their dormancy and hasten sprouting.

Refrigerate seeds during storage. Should flower in about five years after germination.

Scarify seeds with sandpaper or similar. Soak in water for 24 hours. Stratify in warm temps for 120 days, then cold for 90 days. Germination may take two years or more.

The seeds should be sown in nursery pots filled with moist seed-starting compost and placed in a bright location where temperatures stay above 85 degrees Fahrenheit for two months. After the warming period, move the container outdoors against a north-facing wall or into a refrigerator at 40 F for three months to stratify. Keep the compost slightly damp during the stratification period, but don't allow it to become soggy, or the seeds may rot.