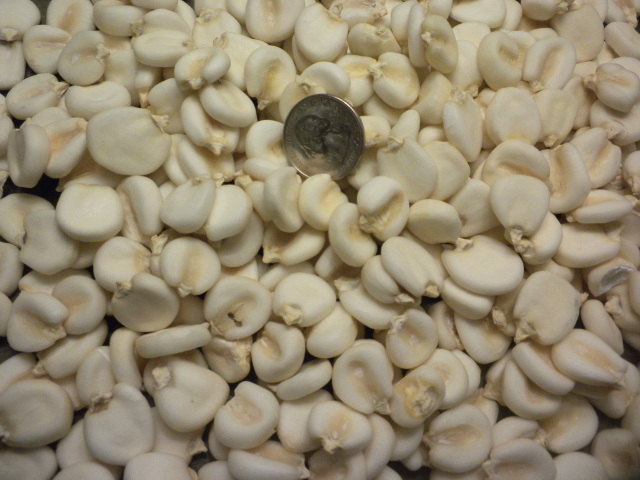 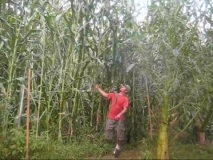 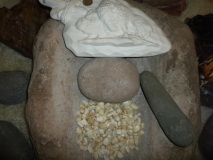 NEW SOURCE from Peru. About 80% germination. The first batch of seeds were limed and dead, even though Woodland Farms claimed they were "all natural." They were not.

Needs 6-8 months to maturity. May need support against wind.

Giant one inch kernels sit upon huge two foot long ears anchored upon towering 20-foot stalks. The king of all corns, larger even than Hickory King. This heirloom corn was a staple among the Incas and is still a favorite south of the border. Some kernels are as big as a quarter! About 25 seeds per ounce.

Giant white corn is perfect for posole, hominy and masa harina. This corn can also be baked or slaked, broiled or boiled, fried or dried, used in soup du jour, or tossed with rice and spices. Young fresh ears may be boiled and eaten like a sweet corn. A truly versatile food that powered the Inca Empire for centuries. Often found baked whole and salted in Latin grocery stores.

Add to Cart
THE ORIGINAL HEIRLOOM corn of the Americas and the Incas, being dried and later ground into the staple food for one of the greatest American Empires in history. This traditional plant somehow manages to grow huge two-foot long ears, with giant seeds to the size of Washington Quarters, on towering 25-foot stalks, all over the Andes with a short growing season. Might I venture to say that this is a fast grower? I believe this giant white was the father of, or forerunner to, our own Hickory King dent corn here in the USA.

This original Incan corn is used along the entire Andes range, but many believe it originated around Cusco, Peru, the Capital of the Incan Empire before becoming occupied by the invading Spaniards. Contrary to what many in America believe, the Incan people are still alive and much of their culture still remains, including this corn.

In traditional Mexican cooking, giant white corn is finely ground to make masa. Fresh masa that has been dried and powdered is called masa seca or masa harina. To make hominy, field corn is dried, then later treated by soaking and cooking the dried seeds in a dilute solution of slaked lime (calcium hydroxide).
The original cultivation of “giant white maize” (or paraqay sara in the local dialect) in the sacred Urubamba Valley of Peru can be traced to a time before Columbus, or pre-1492. References to the crop have been found in the cosmological calendar, in religious tales, and upon artifacts of pre-Columbian civilizations such as the Inca Empire. Historical evidence of crop growing (particularly maize farming) is still seen on the hillsides of the Urubamba Valley, which still has deep terraces that were dug by the Incas.
The word pozole (pronounced po-so-LAY if in Mexico, po-SOLE if in Central America, hence the interchangeable use of the word “posole”) comes from Nahuatl and means “foam.” The hominy expands while it cooks and opens in such a way that it appears to bloom—and in so doing it forms some foam on the surface of the cooking liquid. That’s how you know when it’s ready to eat.