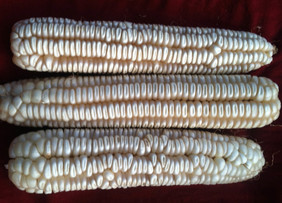 85/110 days. A pre-1875 Heirloom white dent corn originally grown by Native Americans in N. Florida and S. Georgia. Hickory Cane was prized across the mountainous South for roasting ears, creamed corn, grits, hominy, and particularly for white cornmeal, as well as fodder for animals. This variety is also used in Tennessee for making whiskey and bourbon. Plants up to 15 ft. tall. Tight ears keep out ear worms. Large ears stay in the green milk “roasting ear” stage longer than most heirlooms.

The kernels of Hickory Cane are about half the size of Hickory King, which is a completely different and unrelated variety of dent corn often wrongly thought to be the same.